The Man with
3D Vision. 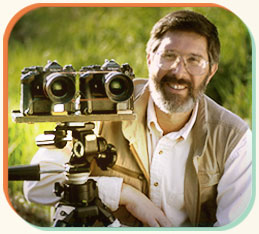 If you've picked up an original View-Master in the last few decades, chances are the images were shot by one man. Rich Dubnow (aka the Most Experienced 3D Photographer in the World) was lead photographer at View-Master for twenty years producing work for creative visionaries like Jim Henson and Steven Spielberg.

In 1997, Rich Dubnow left his job at View-Master, settled in the picturesque Pacific Northwest, and founded Image3D in his home with the idea of personalizing the iconic 3D viewers. Since then, Image3D has grown from a kitchen table operation to a state-of-the-art facility producing custom-made 3D experiences for everyone from blushing brides to corporate titans.

After 15 years of success in using the reels and viewers as a marketing and promotional tool for businesses, Image3D decided to expand into the general consumer market. In 2012 it launched its “Celebrate” website so customers could start making their own custom reels and viewers.

Now, with the patented "Reel Builder," the company and product has continued to succeed. In 2015 Image3D re-branded the program of personalized reels to RetroViewer. In 2016 it launched a mobile version of the website in response to customer demand.


The configuration and appearance of this viewer device is the View-Master trade dress owned by
Mattel, Inc. and is used under license from Mattel, Inc.