Marriott’s Swan and Dolphin Resort and Conference Center is set right in the middle of Disney World. Every year it welcomes thousands of convention goers, event attendees, and tourists from around the world. Originally built in 1990, the entire resort has undergone a massive redesign for its 25th anniversary, culminating in a $12 million redesign of the Dolphin lobby—the centerpiece for its half-million square foot events space, set to open in fall of 2017.

The Swan and Dolphin Resort hosts hundred of meetings and conventions and tens of thousands of attendees throughout the year, and wanted to find a way to showcase the renovations to event planners and organizers. Already familiar with Image3D, Swan and Dolphin Director of Creative Marketing Jeffrey Davidson knew he had just the way to show “an all-new perspective on meetings and events” to his clients.

“Being associated with Disney, something nostalgic like Image3D’s custom viewers takes everyone who picks one up back to their childhood,” he said. Davidson also explained that he was looking for something that clients would remember and hang onto, not a flyer or a postcard that would be lost on a desk or end up in the trash. “Nostalgia is a great selling point, especially for people who’ve done business with us before. And, everybody who comes into the office picks it up and says how fun it is.” 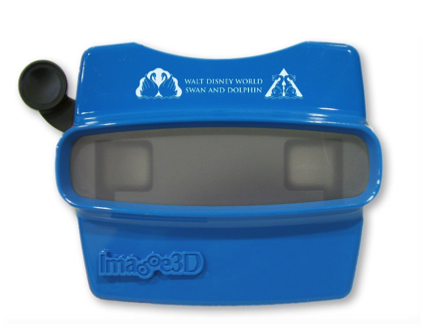 Teaming up with Image3D for the second time, Davidson created a photo reel using concept photos and architectural renderings of the yet-to-be-built Dolphin lobby, along with the tag line “An All-New Perspective on Meetings and Events” to show what the finished event space would look like. Davidson included a call to action to visit the newly renovated space, and sent them to 750 key clients like third party meeting organizers, event planners and associations who’d previously done business with the Swan and Dolphin Resort.

Although the campaign launched six months prior to completing the renovations, Davidson has been getting one or two calls daily from clients who received the custom viewers and reels.  “It was something we needed to show. It works, and we’d love to use Image3D again.”


Once the renovations are done, Davidson plans to create a new reel to send to clients showing them exactly what the new lobby looks like. Since clients already have the viewer, a second reel makes a nice follow up and reminder to plan their next event at the fully renovated Swan and Dolphin Resort.

Image3D knows how to help companies succeed. Producing high-quality images on a unique medium that informs, inspires and entertains is what we do. Whether you’re a creative marketer yourself like Jeffrey, or you just have an idea of what you want to do, we will work with you and your company to tell your story in a unique way. We can take any image and deliver a high quality, custom reel and viewer to help you stand out and succeed.

When asked what he thought of his experience working with Image3D, Davidson said, “Everyone at Image3D is pleasant and helpful. We’re pleased as punch!”